I have just been to the Data Summit in Edinburgh, I hadn't been before. It was a good event - a single track of fairly high quality speakers on topics around data, tech and AI organised by the DataLab. Here are some of notes on a few of the speakers that stood out to me. 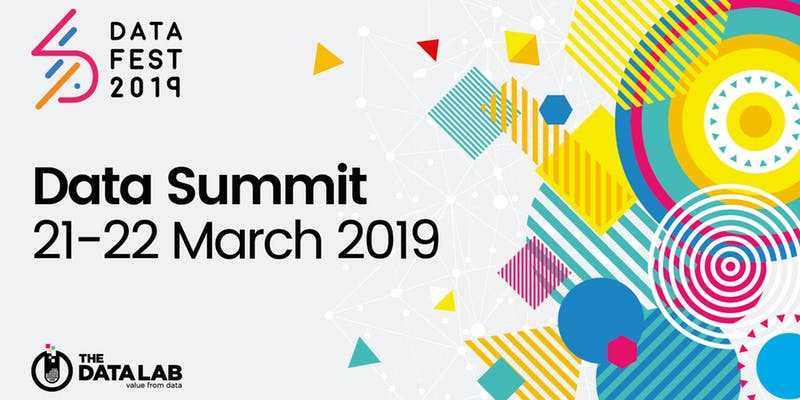 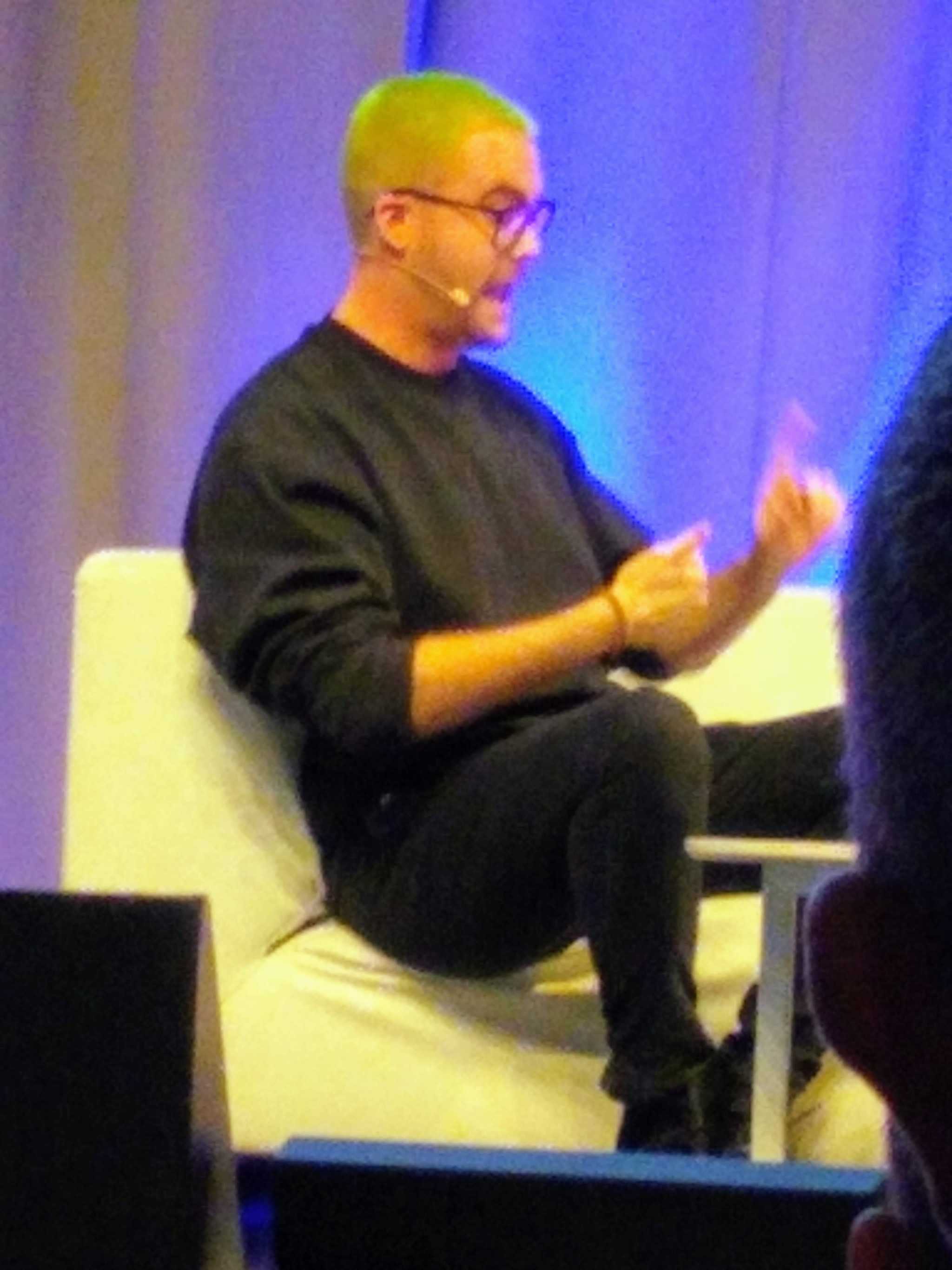 This is the guy who blew the whistle on Cambridge Analytica. He told the story of how he had worked for the UK based data consultancy from when it was doing work for the US and UK military, through to its role in influencing voters in both Vote Leave and in Trumps election in the US. He was wonderfully candid and blunt. A surprisingly effective speaker: intense but genuine. It's a story we've heard before but it was fascinating to hear from such an insider. Some highlights:

Despite the tales he told he did have some constructive suggestions: We need design and safety standards for the internet. Big Tech should be regulated like a utility. Tech companies make addictive products that cause harm and are now essential to our way of life. The should be regulated by technical bodies in the same way as buildings, medicine and airlines. There seem to be a lot of this type of talk about at the moment, I wonder how easy it will be to create regulation that can keep up with such a fast moving target, but I do tend to agree with the sentiment.

I hadn't come across her before but she is great - a professor of computer science at the University of Durham. An appealing personality with bright dyed red hair. She gave a bit of her background - she left school at 16, was in women’s refuge at 25 with 3 small children, went back to education at 26 and who went on to became a renowned computer science professor. She spoke abut how Twitter had helped her in a sucsessful campaign to save Bletchley Park. It was nice to have a fairly positive story after Wylie's doom before hand. 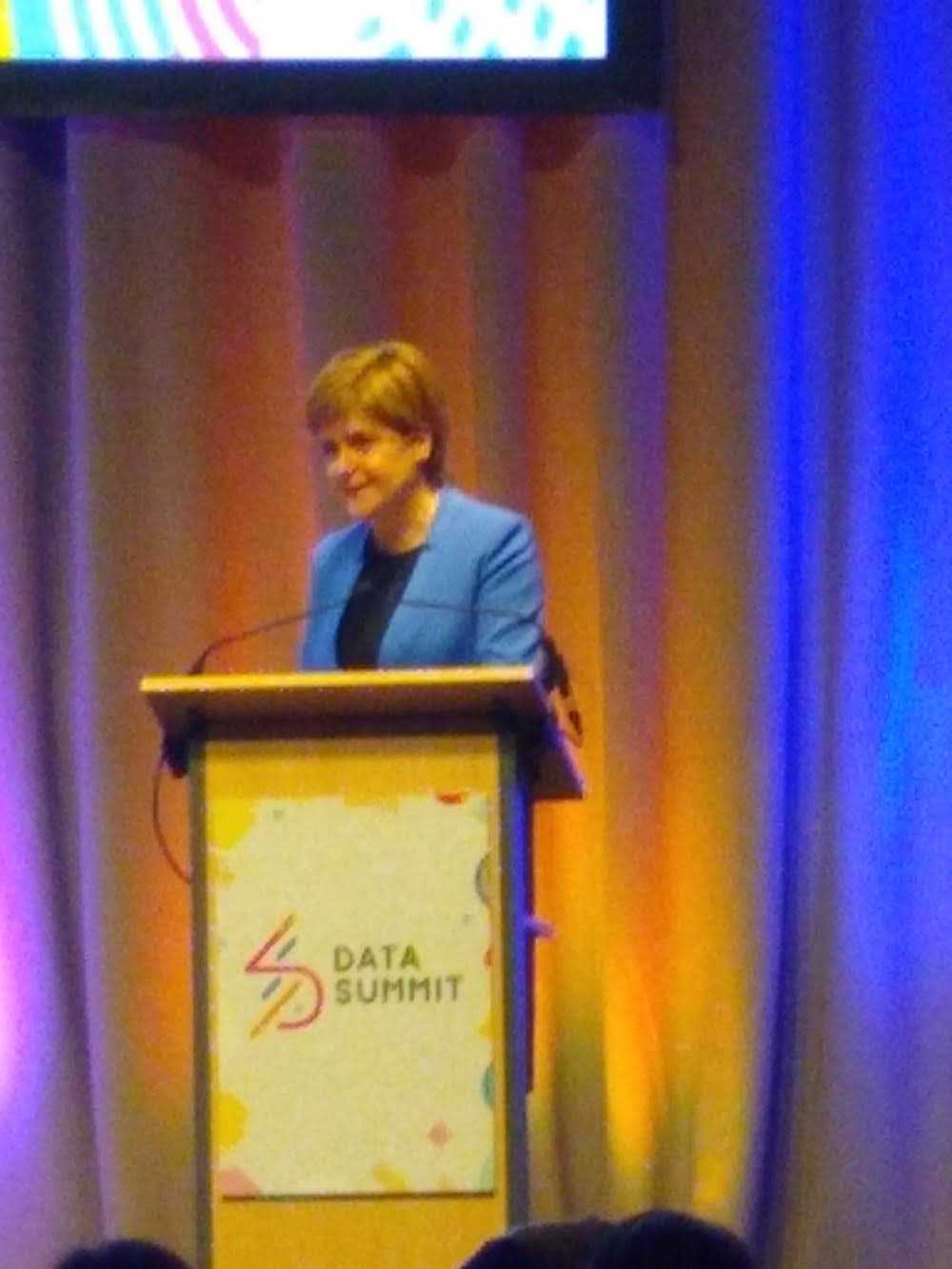 The Scottish First Minister made an unannounced speech. Started by saying what a relief it was to be talking about something other than Brexit. She made lots of noises about how great data was and how Scotland was also great and invented most things. There does seem to be a lot of political support for data and AI tech firms in Scotland. She wants Edinburgh to be the 'Data Capital of Europe', whatever that means.

I like Nicola Sturgeon, she comes across as genuine, smart and is often funny. She stayed about for quite a while after her talk as well which I liked.

Stephanie is a researcher and broadcaster who spoke about biometrics - identifiable characteristics of individuals. She has some fairly strong views on the need for increased oversight in this area. In particular, she is concerned about the rise in facial recognition software. She sees the ease with which it allows governments and corporations to conduct mass surveillance as a threat to freedom. She spoke about the rise of social surveillance in China. Now millions of Chinese people are being constantly monitored and scored on a whole range of measures in a way that effects their ability to live their life. One particularly alarming example being the so called deadbeat map app that allows any Chinese citizen to scan anybody else's face to determine if they might be a 'deadbeat', who owes somebody money. This kind of thing is pretty scary, seems like some sort of sci-fi dystopia, but is actually here, now. Like Christopher Wylie she was calling out for an increase regulation.

Rob McCargow is the accountancy firm PWCs smooth talking director of AI. He gave a wide ranging, well honed, talk on the impact of AI on business and the world. It was all fairly positive. PWC have made an estimate of the economic impact of AI on the global economy of $15.7trn. How they arrived at this number I'm not sure, but I'd certainly put a large amount of uncertainty around that prediction (and for that matter any prediction about the impact of one technology on the global economy). I don't even know how you might estimate such a thing retrospectively. But I guess that's what we have accountants for.

I liked the quote he used from Douglas Adams:

“I've come up with a set of rules that describe our reactions to technologies:

He also gave some good rules his kids came up with for building Intelligent robots: 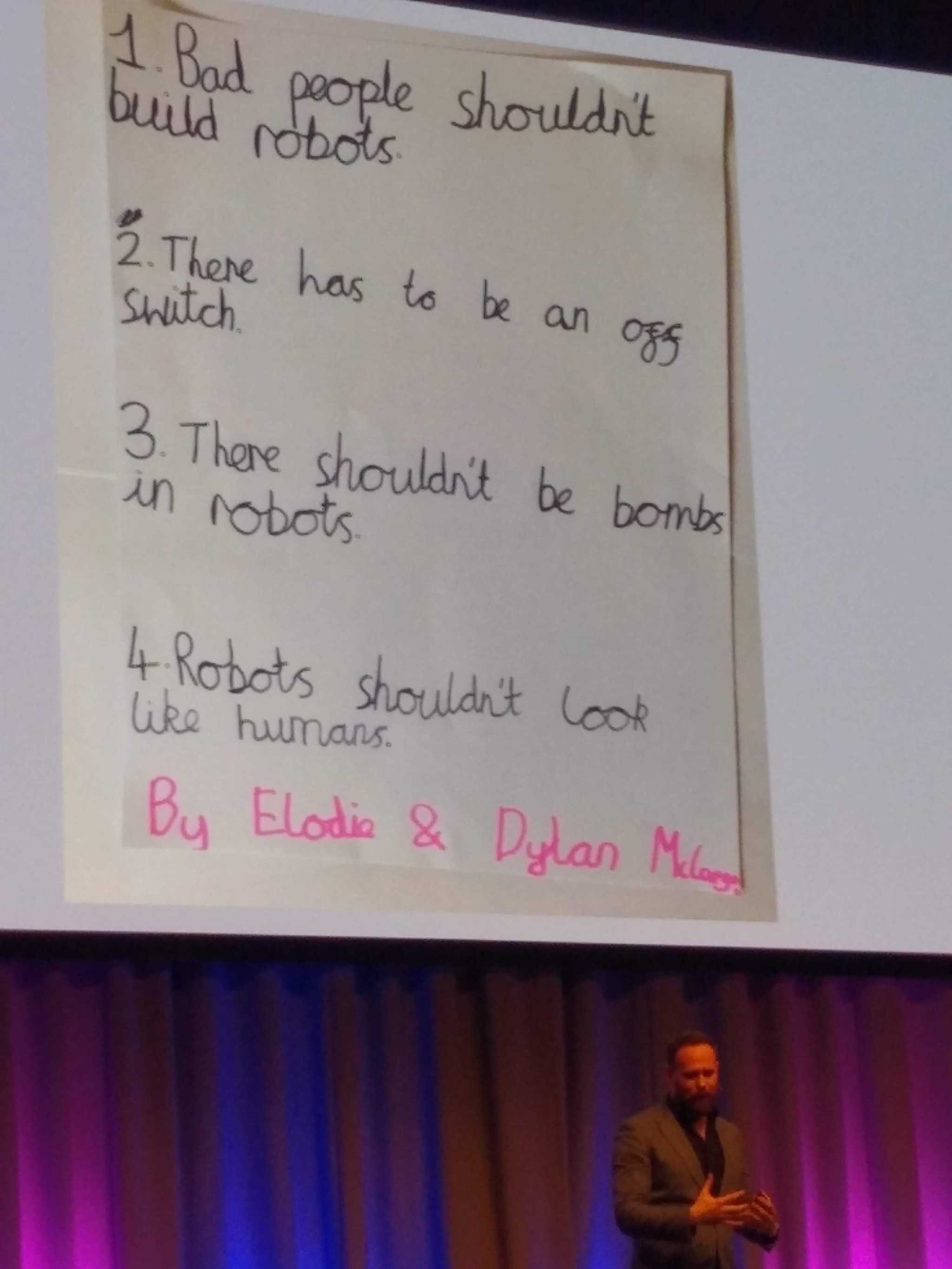 Good: the calibre of speakers was on the whole very high and the single track meant there was a good focus. All the talks were a bit 'TED' influenced - which is not so much a criticism as an observation on the impact those types of talks have had. It mostly means pretty good, polished talks with clear narratives, but everybody has a 'counterintuitive idea' or a 'call to action' earnestly talking about abstract concepts without much detail. You enjoy it while it is happening but leave a little undernourished, a bit like a McDonalds: intellectual junk food. Sometimes I crave an hour in the presence of some unpolished professor scrawling equations on a board, but maybe thats just me.

On the whole it bodes well for tech and data in Scotland and I would recommend this event. DataLab (the body who ran it) did a great job of organising it.